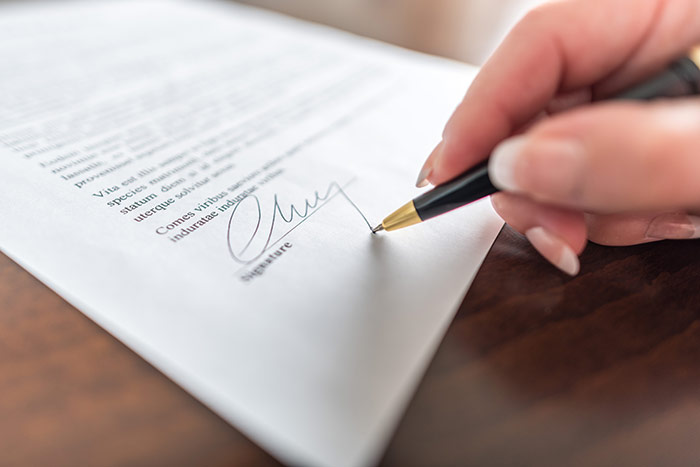 Would you buy a house without a deed? Would you buy a car without getting its title? Or do you blindly sign every document that shows up in the mail promising free money? I’m assuming that you answered all of those questions with a “no.” So why is it that most people are smart enough not to engage in the ridiculous examples mentioned above, yet when it comes to contracts and people in the adult industry, I find myself dealing with clients every day who either rushed into an agreement without a written contract, didn’t consult with a lawyer prior to making a contract, and/or didn’t understand the terms of a contract before they signed it?

First, a simple definition of a “contract:” a contract is an agreement between two or more parties that is enforceable by law. While many contracts are in written form (and very much should be), many states only require that certain types of contracts be in writing. The legal term “statute of frauds” generally governs which types of contracts must be writing. Traditionally, the statute of frauds applies in the following circumstances: contracts in consideration of marriage, contracts that cannot be performed within one year, contracts for the transfer of an interest in land, contracts by the executor of a will to pay a debt of the estate with their own money, contracts for the sale of goods above a certain value, or contracts in which one party becomes a surety (acts as guarantor) for another party’s debt or other obligation.

Think of a contact as a set of rules and regulations that only applies to your particular transaction with the other party or parties. As long as the provisions of a contract comply with applicable laws (and you should always consult with a lawyer when drafting a contract to make sure), the possibilities are endless. All of the different provisions that can be incorporated into a contract are impossible to list because depending on your particular needs you can put anything in a contract.

I’ve been conducting business and practicing law in the adult industry for more than six years, and to this very day it amazes me how many “handshake” deals are still being made that inevitably lead to disaster. Yes, it’s true, I’m sure that someone or at least a few of you reading this article have somehow managed to complete a business transaction without a formal written contract. My response to you select few is that this was pure dumb luck.

If you’ve taken time to enter into some type of business relationship with another party and most likely spent some hard earned cash as well, why not protect your investment by having the terms of the deal put in writing by an attorney to insure your time and money? If things go badly and you are forced to resolve your dispute in court, without a written contract it is extremely difficult if not impossible to establish what the terms of your agreement were.

What about when you are presented with a written contract by the other party and told, “Trust me; this has all the terms we agreed to – sign on bottom line?” I can guarantee that more than half of the people reading this article would either sign as told without reading the contract or sign it after reading but without fully realizing all of the possible implications. There are so many different things that need to be considered when signing a contract, so why not spend a few bucks to hire a lawyer to explain what everything means or make suggested changes to the contract to better protect your interests? The alternative is that when things go wrong in the future, you’ll be spending tens of thousands if not hundreds of thousands of dollars tied up in court, possibly losing the case on top of that.

Being able to predict what the future holds is impossible. You can’t do it, I can’t do it, and any lawyer who tells you that he or she can is lying. But what a lawyer can do is draft or interpret a contract keeping the future in mind while taking into account your goals and concerns, all the while being aware of how you see the entire transaction playing out.