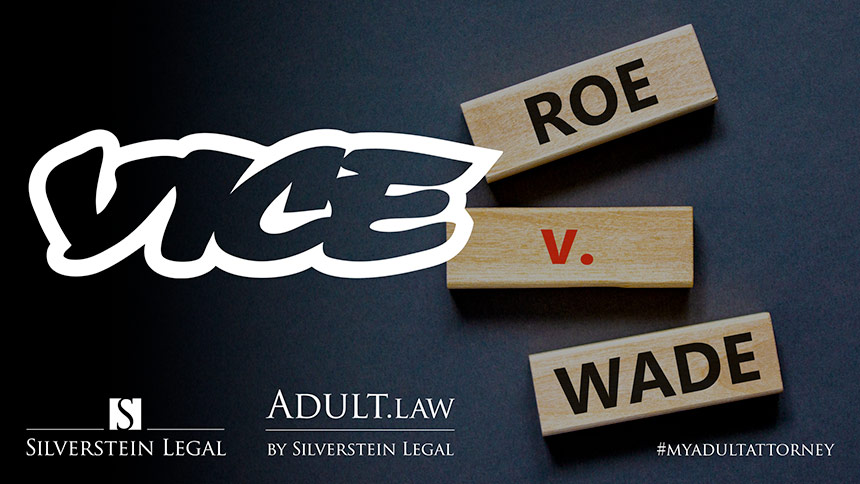 myadultattorney shared his insights as part of a piece exploring the wider sex work-scape in light of Roe vs. Wade’s recent overturn.

Cyberspace (October 24, 2022) – Corey D. Silverstein, the driving force behind MyAdultAttorney.com and Adult.Law, recently spoke to VICE as part of a piece exploring the wider sex work-scape in light of Roe vs. Wade’s recent overturn.

VICE authors wrote that, “In the months since the Supreme Court overturned Roe v. Wade and eradicated the national right to abortion, many sex workers are wrestling with the possibility that they may be unable to terminate an unwanted pregnancy.”

The authors spoke to sex workers in different areas of the field, including adult performer Siri Dahl. Silverstein then added a legal perspective to the piece.

Though he has “yet to come across one instance in 20 years of a performer actually getting pregnant on set,” Silverstein told VICE, “I always recommend performers get health insurance. Always.”

Silverstein then pointed out that this is not always realistic, in part because many people simply don’t have the consistent income to afford it, addeding credence to VICE’s observation that many sex workers live “paycheck-to-paycheck.”

“I was thrilled to be part of this article because VICE continues to cover important issues that media outlets too often ignore, as they involve the adult entertainment industry,” Silverstein said.

“Dobbs v. Jackson Women’s Health Organization overturned 50 years of legal precedent that I’ve studied as a constitutional attorney,” Silverstein explained. “The practical effects of this decision are unfortunately being mischaracterized and understated.”

Adult.Law is a subscription legal service founded by attorney Corey D. Silverstein. Launched in 2020, Adult.Law aims to make legal counsel accessible to as many members of the adult entertainment community as possible. Adult.Law subscribers receive 24/7 access to legal resources specific to the adult industry and individualized 1-on-1 legal consulting from one of the most experienced legal teams in the space.

Silverstein Legal is proud to announce that adult industry attorney Corey D. Silverstein has been…

If you missed Silverstein Legal’s live discussion about protecting personal safety online and in-person, you…